The Highs and Lows of the Highlands with the Beast. 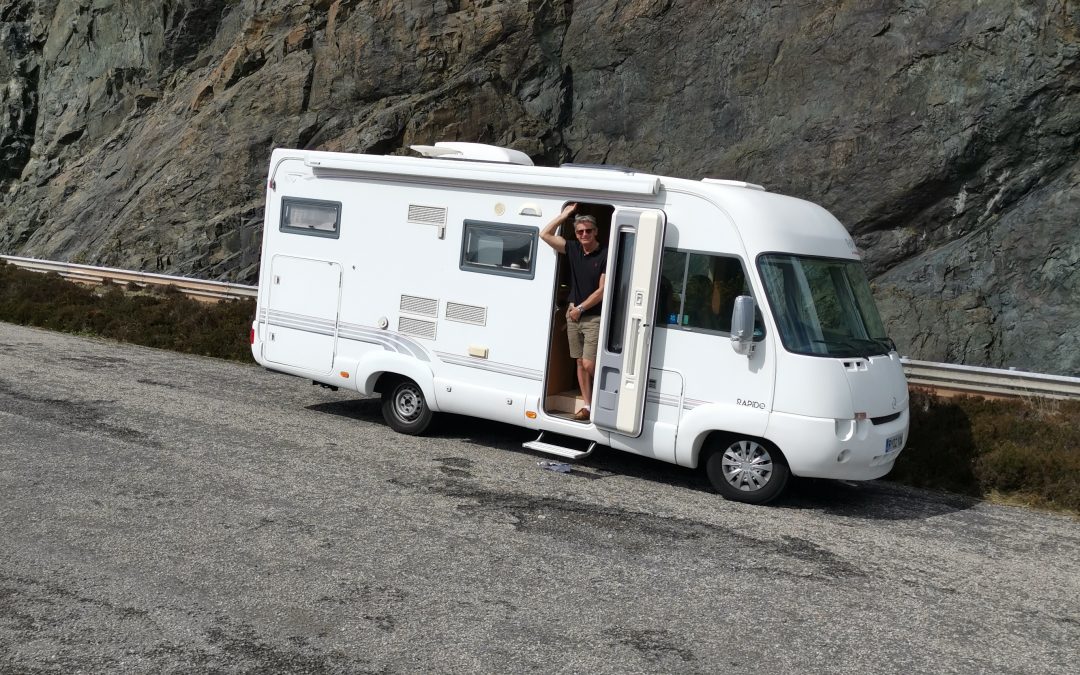 The highs and lows of the of The Beast on the Highlands.

Can you believe we have been on the road for just over two weeks without eating chocolate? Not even an Easter egg and with all this walking and cycling, roll on summer body!

Talking of well-being, I learnt that Edinburgh city is 45% green space which makes for healthy and happy people, it does also have the benefit of access to a great beach that goes on for miles. Inverness is no different, the wildlife and scenic views are all around, rivers canals and lochs wherever you walk makes every excursion a pleasure. We wild parked for a couple of nights in Inverness which is allowed in Scotland. In fact, Scotland’s roads are well organised with clearly marked stopping spaces and bins and every view is a good one. 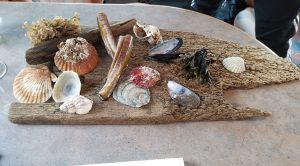 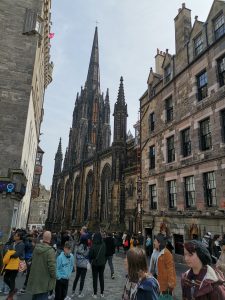 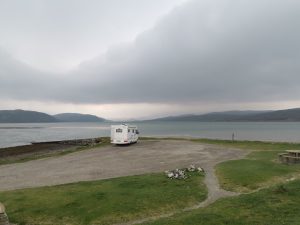 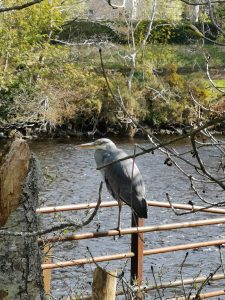 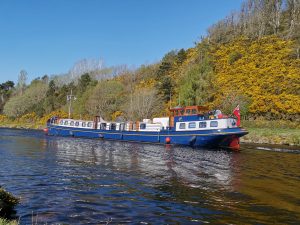 The bike ride from Inverness to Loch Ness is a lovely one, most of it off road and catered for bikes. It takes about an hour and is not too hilly (helps if you have an electric bike too!) There are two routes there, we went to Dores where the pub sits right on the edge of the Loch nestling in its glory, and treated ourselves to lunch as it was Easter Sunday. I had Shetland muscles in cider but they were too small for my liking, Paul’s roast was good though and it’s an easy place to stop for a good while whether to play, swim, skim stones or do the many walks around the forests there, something for everyone. Nessie Hunter.com is also resident which makes the trip more interesting as he has been looking for Nessie for over 25 years so has many stories to tell if you catch up with him. In case you were wondering we didn’t see Nessie either! 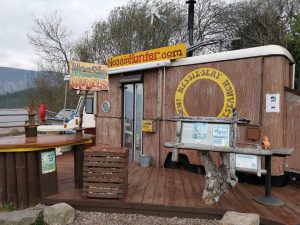 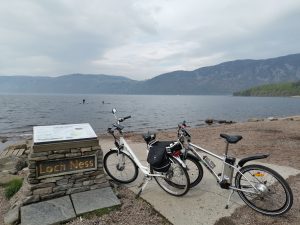 It seems we along with the rest of the country enjoyed beautiful sunshine over the Easter period and that helped us to slow our pace down. We research how to go about the North Coast 500 route and decided to do it backwards. We met two chaps older than us, setting off to ride the NC500 on their pushbikes, we thought we were good, riding a few hours that day, we didn’t mention that! Good luck to them.

The route is like a pick and mix, you read about the next stop and decide if that’s what you want to see, perhaps something the Vikings left, or a world war two relic, or one of nature’s highlights. There is something for everyone and without the book you would drive through what looks like a few houses and a post office and not realise it has hidden gems. However, although six months sounds like a long time, we have to be selective and so enjoyed just driving for a couple of days on what is a great road, never thought I’d be saying that, but with the big Beast on a single carriage way you appreciate Scotland’s Passing places frequently interjected along the route. As well as the scenic Stopping places off set from the road, it’s easy to wild camp here.  The NC500 stops are often only a fifteen-minute to half an hour drive apart, so you could park and make it your base camp then cycle or walk to nearby points of interest.

We left Inverness and stopped at  Evanton and the Black Rock Gorge. The main village car park will take a motorhome so that’s a bonus. The post office lady suggested we walk through the woods to see the Gorge and we were so pleased we followed this advice. A beautiful wood that is a must to visit with children, dogs, or just you. It is well looked after and catered for by the community, you can tell the children have a ball there with camps, fires and play areas. That aside the wood evokes fairy-tale and fantastical thought. We found ourselves creating stories of fairies, elves and nymphs dancing in and around the gnarled old trees, it was magical. The Gorge is a force of nature dramatic and mesmerising, worth the stop off. By the way we didn’t stick to the path as is suggested, we were distracted by the bird song, fauna and flora, streams and waterfalls, consequently we added about two and a half hours to our walk! 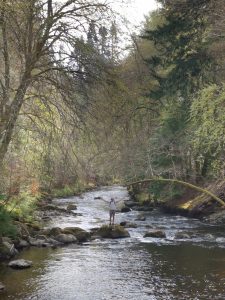 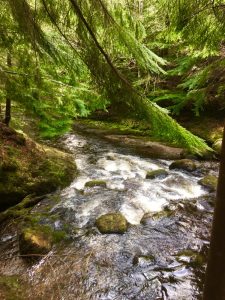 Just a 15 min drive and I’m lured to what is described as the Jewel in the highlands, Dunrobin Castle and Gardens. This one of course, is also not part of English Heritage or the National Trust! It has a lot of personal artefacts on show from the history of the family which I love. Its location on the beach and the gardens are stunning.  They have plants that look like something out of a prehistoric era which they explain to the children are dinosaur food. (part of the rhubarb family but you can’t eat them) and regale you with stories of ghosts and legends. I’d like to tell you what they are called but after the chap said it three times, I just nodded and smiled. 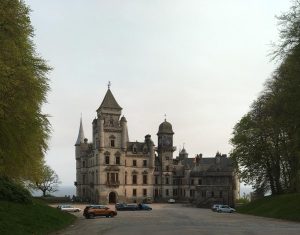 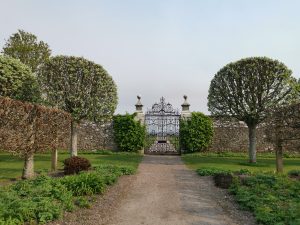 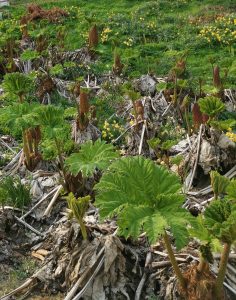 Rock Stop part of the Geo Park of the Highlands, was a unexpected surprise, so tucked away, you may even think you are passing someone’s house. Apart from the shop and café there is a room with a large screen playing an interesting introduction to the geology of the rocks and mountains you are driving through, as well as an exhibition of studies, finds and research. 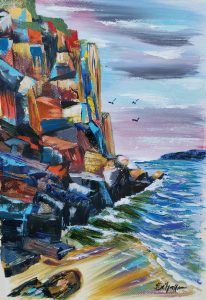 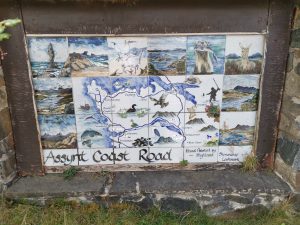 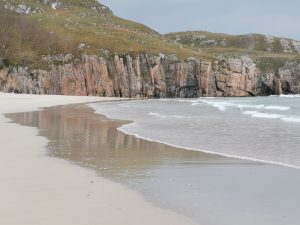 We decided on visiting the isle of Skye to the West, as opposed to The Orkney Islands so cut the tip off of Scotland, missing John o’ Groats. It depends on who you talk to as to whether that was the right choice or not but hey, we can come back.

From Scrabster along to Betty Hill A836 the route just gets prettier and with everyone saying on the West coast every corner is a photo opportunity I can’t wait, but know I will be testing Paul’s driving patience!

Well we are into our third week and I think we mentioned the Gaffa tape didn’t we? So, our wing mirror kissed a passing similar motorhome and knocked itself out…Paul = Gaffa Tape. Then we stopped to repair it properly, when Paul opened the tool box hidden under the van the whole thing just dropped off! Paul …= this is going to take more than Gaffa tape! After putting the contents in the shower, not easy, when we next stopped, we couldn’t understand why the pump was making a funny noise? Yes, the shower had been knocked on for a while! The next stop and we realised we were missing a wheel trim, Paul… = needs cable ties! And lastly back on the road and water started dripping in front of me onto the dashboard, we had only had a little rain so we were concerned but… Paul… = silicone or mastic, by this point Paul was talking and I was just nodding! So, So far so good. 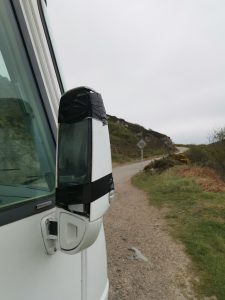 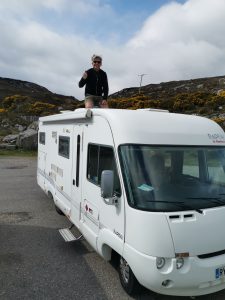 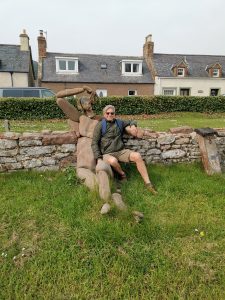 For those interested in camping, we stopped off at a site at Brora which was just a minutes’ walk to a windy beach 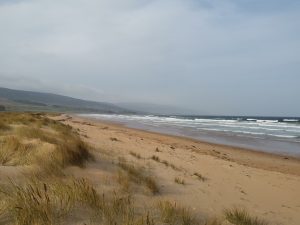 , a few nights wild, then we stopped at Tongue and then Gairloch, again right on the beach. All site are good but Gairloch really grabbed us so after one wild night! we stayed just outside at Sands Site which is well equipped, spacious and on a great pathway to the town of Gairloch which is spread right around the Loch, so just when you think you have come to the end of the town, a short cycle and there’s more. We stayed for a few days and enjoyed sitting on top of a hill looking for Porpoise and Whales. Finding shops like Budha by the Sea and the Trading Post to hang out in. This and the Cove are popular places for Yoga retreats so had to include some photos for you. 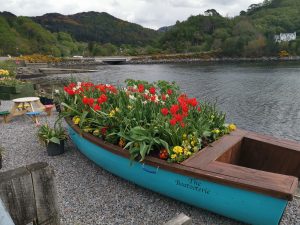 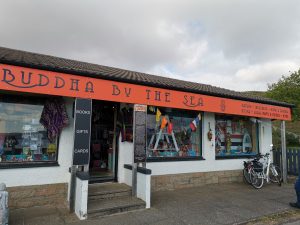 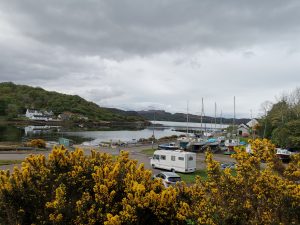 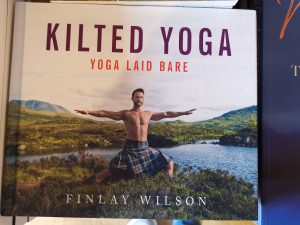 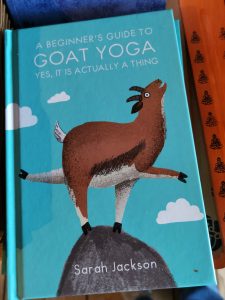 We stayed at Sands for three nights, we would highly recommend it. Paul = maintenance! We shared some drinks with some lovely people, enjoyed a live band in The Old Inn and painted outside with a view you can’t tire of. What the Highlands don’t have in abundance is connection, but everyone is relaxed about not having wifi at home for months, their answer is, they have the view, and you can’t argue with that. 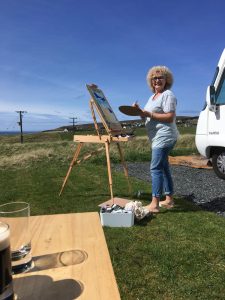 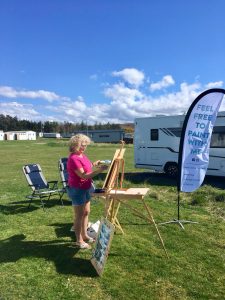 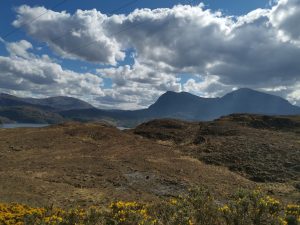 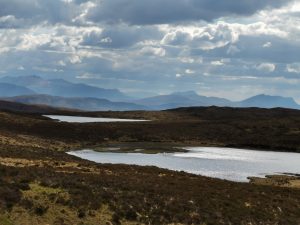